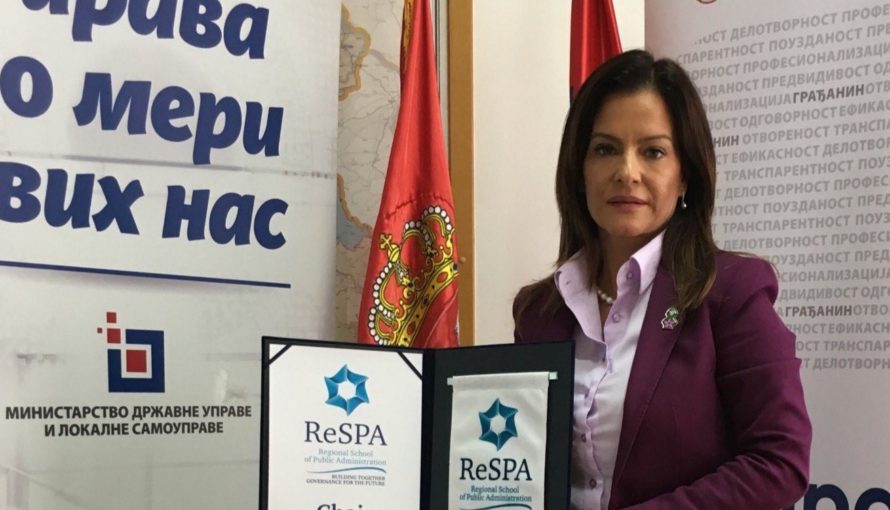 The Minister of Public Administration and Local Self-Government, Marija Obradović, officially took over the presidency of the Regional School of Public Administration – ReSPA today. At a virtual ceremony held as part of the meeting of ministers of the region, the Minister of Public Administration of Montenegro Suzana Pribilovic presented the Minister of Public Administration and Local Self-Government of the Republic of Serbia Marija Obradovic with the RESPA flag, which gave our country a mandate to chair this important international organization. Given the priorities of the Government of RS and the current situation with the Covid-19 epidemic, our priorities during the presidency will be improving the digitalization process, introducing quality management tools in the administration, improving crisis management and improving the quality of services in general – said Minister Obradovic. She added that public administration reform and the process of accession to the European Union are strategic priorities of the Government of the Republic of Serbia. In that sense, we expect cooperation and strong support from ReSPA to the entire process of public administration reform, with a special focus on the field of digitalization, development of e-Government and improvement of information and communication technologies – said Minister Obradović. The establishment of a regional center for quality management in public administration was especially welcomed at the ministerial meeting. The ministers of ReSPA members fully support our initiative to formalize a single resource center for quality management, given that ReSPA is one of the few institutions in the region that has been awarded the European “CAF” certificate. This certificate is a confirmation that our institution applies eight Principles of Excellence in the public sector, and in that sense we are already operating as a Center of Excellence in the Western Balkans – ReSPA Director Ratko Sekulović emphasized. The Government of RS also won four awards in the region’s first public administration competition. As part of the ministerial meeting, ReSPA also organized a virtual ceremony of announcing the winner of the first competition of the Western Balkans Public Administration Awards. The most awarded projects are from the Republic of Serbia for applications such as e-Scheduling for PCR testing, https://covid19.rs/, contact centers e-Inspector, e-Market … Today’s meeting was also attended by Jeton Šaćiri, Minister of Information of the Society and Administration of the Republic of Northern Macedonia, Majlinda Duka, Director of the Department for Development and Good Governance in the Cabinet of the Prime Minister of Albania, Neven Aksamija, Director of the Civil Service Agency of Bosnia and Herzegovina, Genoveva Ruiz Kalavera, Director for the Western Balkans (DG NEAR), as well as senior officials from the Western Balkans. ReSPA is an international organization founded in 2010 by a joint initiative of the European Commission and the countries of the Western Balkans.