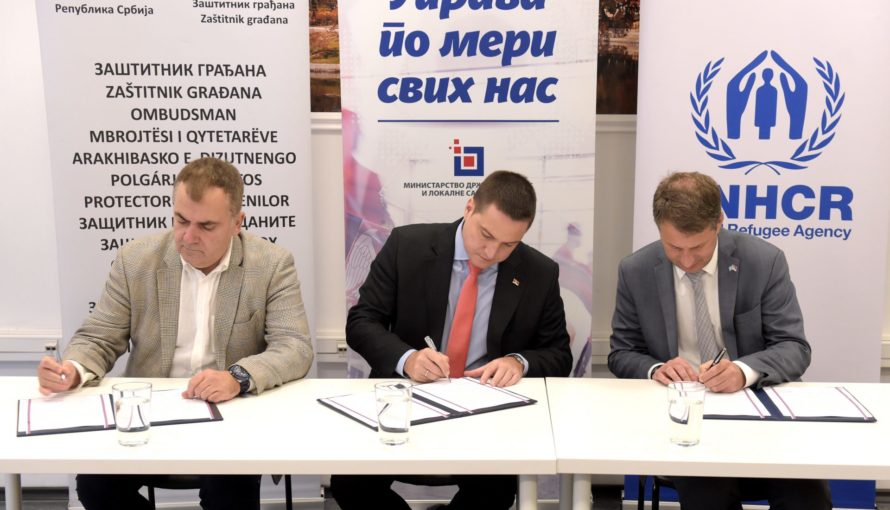 The goal is to eradicate statelessness in the world by 2024, and Serbia has made great progress in this area and this goal will be achieved quickly, because the data show that about 700 members of the Roma national minority remained unregistered in the registry books, it was said today at the signing of an agreement on the continuation of cooperation between the Ministry of Public Administration and Local Self-Government, the Protector of Citizens and the UNHCR in Serbia.

In order to prevent the risk of apartheid, Minister of Public Administration and Local Self-Government Branko Ruzic, Protector of Citizens Zoran Pasalic and Head of the UN Agency for Refugees Hans Friedrich Schoeder signed an Agreement on Understanding on further cooperation in considering possible problems of Roma minorities when trying to enroll in the Birth Register and other rights from personal status.
Ruzic stated that registration in the Birth Register is a precondition for exercising all other rights, such as social and health care, and added that regulating these rights is the first step in preventing any risk of statelessness.

Ruzic reminded that the first agreement was signed in 2012 and that during its four-year implementation, the issue of enrolling citizens, primarily Roma children, in the birth register was completely resolved.

“Earlier, the focus was on the enrollment of Roma children, and now the focus will be on mothers in order to resolve their legal status,” Ruzic pointed out, adding that in the 21st century we must not allow our citizens to not have any personal documents.

“Having in mind the results of the previous Agreement on Understanding jointly implemented by the Protector of Citizens, the Ministry of Public Administration and Local Self-Government and UNHCR from 2012 to 2016, I believe that signing the new Agreement is the right way to resolve the remaining issues regarding status that most often affect the most sensitive group – members of the Roma national minority. The data show that there are still citizens and children who are invisible to the system, which is the reason why the Protector of Citizens continues to monitor the situation in the area of ​​registration and personal documents, “said the Protector of Citizens Zoran Pasalic.

According to estimates, the number of people at risk of statelessness has decreased from 30,000 in 2010 to about 2,000 in 2019. Since 2004, through various free legal aid projects funded by the UN Refugee Agency, enrollment in appropriate registries records is provided for 5,549 persons. UNHCR also supported the issuance of 34,083 ID cards and 150,620 certificates from various registries.

Signing the Agreement that regulates further cooperation in this area today, Hans Friedrich Schoeder, Head of the United Nations High Commissioner for Refugees in Serbia, said: “This year, when we mark the 30th anniversary of the Convention on the Rights of the Child, the UN Refugee Agency successful tripartite cooperation in order to ensure the registration of all children born in the territory of the Republic of Serbia, including those whose parents lack personal documents or who do not have legal status.

An important step in the global campaign to eradicate statelessness is precisely that all children should be registered in the Birth Registers and citizenship books. “